SHOT DOWN IN FLAMES 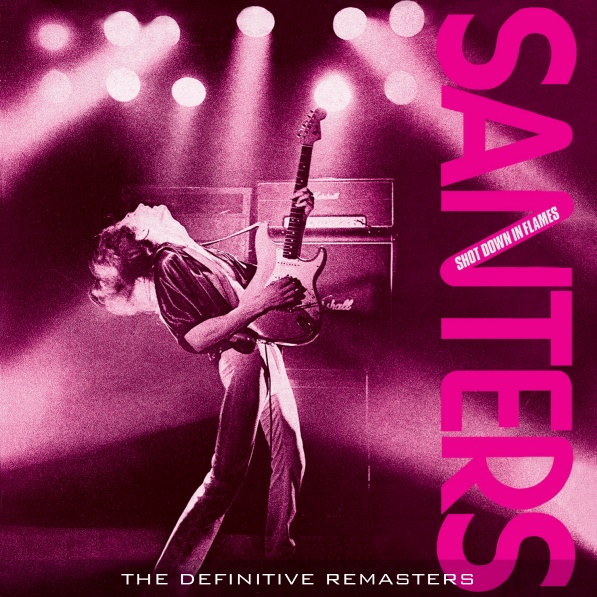 Recorded and Mixed at Masters Workshop, Toronto ON
Remastered by Edward Tobin at ECV Mastering Studio, Toronto ON

The Rapper
Words and Music by Dominc Ierace

Hey girl I bet you, there’s someone out to get you. You’ll find him anywhere – on a bus, in a bar, in a grocery store. And he’ll say, “Excuse me, haven’t I seen you somewhere before? Rap, rap, rap, they call him the rapper. Rap, rap, rap, you know what he’s after. So, he starts his rappin’, hoping something will happen. He’ll say he needs you, a companion, a girl he can talk to. He’s made up his mind. He needs someone to sock it to. chorus He’s made an impression, so he makes a suggestion. Come up to my place, for some coffee, or tea, or me. Well he’s got you where he wants you. Girl you’ve gotta face reality.  chorus

You Turn Me On
Words and Music by Rick Santers

Time After Time
Words and Music by Rick Santers

Lost And Found
Words and Music by Rick Santers

I’m on a rolling tide, rolling away. I know the pleasure’s mine hope that it can stay. And I can’t hold nothing on you. It’s my fault I know it’s true. I let you get the better of me, can’t you see? I’m lost and found. Looking for a clue, with nowhere to start. The distance seen between us tears me apart. I’m on the road to reason forever and a day. My sentence is my prison here I’ve got to stay.  chorus

Shot Down In Flames
Words and Music by Rick Santers

Caught In The Wind
Words and Music by Rick Santers

Paths Of Heart
Words and Music by Rick Santers

Points Of Resistance
Words and Music by Rick Santers

When temperance ceases from conflict and lesions, time’s cynical teacher revolves in confusion. Friction increases as two worlds collide. The sensible virtues from chaos subside. Occurring in cycles, life’s aesthetic preacher survives in the riddles provided by seekers.  chorus  Maybe I’m a rich man and don’t know what I like. Maybe I’m a poor man with everything in life. Some say there’s a reason hidden in the rhyme. So I’ll take my chances and I will take my time. From now he is sleeping protected by ego. But time may arouse him and he must let his shields go.  chorus

Concert Sound and staging by Kroth

It was during one of their first tours outside of Ontario, in “la belle province”, when they finally got the call from their manager. One week of studio time was arranged to record their first album, or at least that’s what they expected it to be. Rick recalls, “Now the pressure was on to write more songs and put the finishing touches on others. During the daytime, while the club was closed for business we got together and rehearsed every original SANTERS song we had, in spite of putting in three, sometimes four sets a night performing until the early morning hours”.

In December of that year, the band returned home and settled in at Masters Workshop recording studio in Rexdale Ontario for its first sessions. Before digital recording, analogue tape recording was king. The sessions were recorded onto a 24 track Studer A80 machine running 2” tape. The recording console was a 1960’s Neve, and it came with the standard assortment of vintage microphones, compressors, limiters, delays along with some very nice plate reverbs.

The band had only one week to record and mix twelve songs. They began by recording the bed tracks (guitar, bass and drums) which were cut in the first couple of days. The lead and background vocal tracks along with solo guitar tracks and keyboard tracks were recorded over the following sessions. That left only three days to mix all the songs.

The instrument line-up read like a rock and roll textbook. Rick Santers had his 1964 Fender Stratocaster and his 1969 Gibson Les Paul Deluxe pumping through a 50-watt Marshall and 4×12 cabinet. Rick Lazaroff had a 1971 Fender Precision Bass driving an Ampeg SVT while Mark Santers commanded his vintage Ludwig kit.

With the album being almost complete producer Bob Connolly suggested that they record a cover tune. That evening Rick was listening to albums (the vinyl kind). He tripped across an old K-Tel record, “24 Electrifying Hits”, and heard a song he remembered from when he was eight years old. The song was called “The Rapper” by The Jaggerz. After hearing it, Rick knew right away that the band could boot the song into high gear. So, he quickly wrote out an arrangement for the guys to learn for the next day’s recording session. The song was cut in only two takes and became the first track on side one.

Songs written on the road, last-minute daytime rehearsals in the clubs, and five days of recording with three days of mixing. The result: SANTERS debut album. Shot Down in Flames was released in 1981 in Canada and Europe and spawned classics like “Time After Time”, “You Turn Me On” and the title track “Shot Down in Flames”.

With the release of “The Definitive Remasters Collection” SANTERS fans can finally listen to the band’s vast catalogue of rock classics mastered to the level of sound quality that was originally intended. So, sit back, crank it up and listen to SANTERS the way they were meant to be heard.