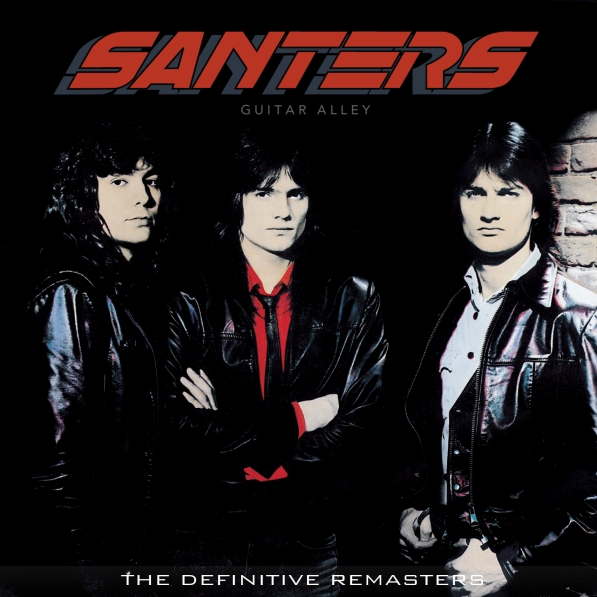 Recorded and Mixed at Metalworks, Mississauga, ON

Can’t Shake You
Words and Music by Rick Santers

Hey buddy, believe me I got no money to my name. My boss wouldn’t pay me, I tell you he’s to blame. They cut me down in my prime, then through me out in the streets. They got me all wrong for God’s sake. Won’t you give me a break, this is all a mistake. It’s a high risk situation going outta control, out of my mind. It’s a high risk situation and I’m growing old before my time. Won’t somebody help me and please bail me out. They say I’m guilty, what’s this all about? They’re putting a number on my picture. They took my fingerprints. I’m locked up in a cell, it’s as cold as Hell. And these guys ain’t my friends. chorus

Hate To Love You
Words and Music by Rick Santers

I remember how we used to be you were easy to please. Never a worry never a doubt, we were sailing in the breeze. Then something came over you, and it made me wonder. I made up my mind and I knew what I had to do. I warned you not to come around anymore, ’cause I hate to love you. I don’t care if the whole world disagrees. I said, “Beat it!”, but you pleaded for more. It’s too late to love you. Release me from these chains and set me free. Let me be ’cause I hate to love you. I was sure I’d never see you again. I thought we had made it to the end. But you returned to the scene of the crime. You began to conjure up old times. Then something came over me, and it made me wonder. It was killing me, murder in the first degree.  chorus  And I don’t care if the whole world disagrees. Your head is telling you that I’m right, but your heart keeps saying I’m wrong. Then you learn that it’s all a game. Love can trick your mind to think you need some more. But it can never be like before.  chorus  Can’t you see you’re killing me. I hate to love you! Ooh, it’s too late to love you.

Too Young To Die
Words and Music by Rick Santers

He used to fight eyes open wide, but fear was there like a knife in his side. Battle came but he refused to hide. Nothing ventured, nothing gained. You’ll never win until you play that game. That’s what he said as he lay dying in pain. Too young to die. Never knew the reasons why. If you could turn back the hands of time. He’d still be too young to die. Why did he go? He could not resist. The price was high, it was death he kissed. We hoped and prayed it wouldn’t come to this. Oh no! Everything ventured, nothing gained. He was a pawn in a political game. Now he’s gone and still the question remains.  chorus  When can we make it end? When will we fly the wind?  chorus

All Right Now
Words and Music by P. Rogers and A. Fraser

There she stood in the street smiling from her head to her feet. I said, “Hey, what is this?” Now baby, maybe she’s in need of a kiss. I said, “Hey, what’s your name baby? Maybe we can see things the same. Now don’t you wait or hesitate, let’s move before they raise the parking rates!” All right now, baby it’s all right now. All right now, baby it’s all right now. I took her home to my place watching every move on her face. She said, “Look, what’s your game, baby? Are you trying to put me in shame?” I said, “Slow! Don’t go so fast, don’t you think that love can last?” She said, “Love! Lord above! Now you’re trying to trick me in love!”  chorus

She waits for me to try and save her. She’s all alone in her dark lonely room. Her fantasy becomes the moment. She hopes the ending is just what she needs to make it through. Baby blue. Her diamond eyes invite me over. The situation is all her control. She makes me feel as if I owe her. But something tells me there’s more than meets the eye. Oh, when she holds me. I feel her fire destroy me. Baby blue, I leave you in the morning, but I’ll stay with you this evening, Baby blue. I wait for her to try and save me. I’m all alone in my dark lonely room. My fantasy becomes the moment. Oh, I hope the ending is just what I need. Oh, when you hold me. Hold me till your fire destroys me.  chorus

Special thanks to Gottlieb and Linda, Axel, Donna and Leta, Debbi Ferrentino,
Gary “Bahahahaha” Rowe and Atomic Sound, the Whale and the Buburban, Rockit,
the Bird, the Rem, Sandee Bathgate and the “Primal Shrieks”, Charles Hunfeld and …You!

“The process for preparing for the recording of Guitar Alley was very different to that of our first two studio albums”, recalls Rick. “First off, all of a sudden we were getting offers from international producers who had taken notice of the band’s popularity and growing success. This meant that for the first time we had to decide on what production direction the new album was going to take. To keep ourselves challenged and growing artistically we wanted to keep what had worked for us in the past, and at the same time open up to some areas creatively allowing for a new producer’s input and inspiration”.

The music producer’s initial role is to act as a sounding board for the songwriter and then work through the material with the musicians. It’s the producer’s job to mirror, suggest ideas and encourage the musicians to guide them through the creative processes. A shortlist of producers was compiled and the decision process began. After the band had met with prospective producers the decision was finally made and Rik Emmett was chosen to lead SANTERS into the studio for their third album.

The project began with Rick Santers bringing his new songs to Emmett to work on. Once the songs were prepped the band and producer met for pre-production work. At this stage of the music’s development, the band rehearsed the material along with the producer, bar by bar, instrument by instrument, until a solid basic musical structure was realized. The difference with the “Guitar Alley” experience was that now the band had another set of ears listening and reflecting on the developmental process from beginning to end.

MetalWorks Studios in Mississauga became the band’s recording home for three weeks in the summer of 1983. The studio was outfitted with and MCI mixing console and an MCI 48 track capabilities running 2” tape.

The choice of the album name “Guitar Alley” came indirectly from a conversation Rick Santers had with the band’s live sound engineer at the time. Rick recalls, “We were playing in an odd-shaped venue and the sound console was situated on one side of the room instead of in the middle. After our soundcheck, I asked our sound engineer how everything was sounding. He said “Well, it’s hard to tell. All I’m hearing is the guitar. That’s all I’m hearing because I’m standing in guitar alley”. That name stuck in my head, and even though I never wrote a song with that title it seemed all too appropriate for the album’s title considering all the new guitar textures that were becoming the basis of the new album”.

The release of SANTERS “Guitar Alley” was groundbreaking for the band in many ways. Along with the album being recognized and released in Europe and Canada, it was also released for the first time in the United States and Japan expanding on SANTERS international popularity. Offers to tour into the midwestern and southern United States increased the band’s already extensive touring schedule and the video for the song “Can’t Shake You” found a home in regular rotation on MTV. Also, SANTERS version of FREE’s classic “All Right Now” became a serious contender in many top 40 charts.

With the release of “The Definitive Remasters Collection” SANTERS fans can finally listen to the band’s vast catalogue of rock classics mastered to the level of sound quality that was originally intended. So, sit back, crank it up and listen to SANTERS the way they were meant to be heard. Enjoy!